It's alright to be you 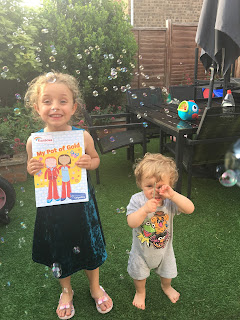 There has been a lot of exploration and rediscovery of God as father in my church recently. I've had my own experience of this and, as the cliche goes, it came through observing my own children.

A few days ago I was at the dentist and standing outside watching my son, Benjamin, bimble around. I know my son, who is just over one years old, and I know that his heart is full of malevolence. I know just how wilful and naughty he is, just how much of a handful he is going to be in the coming years.

Despite knowing all of this I delight in him. Watching him potter around fills me with delight, the mere fact that he exists makes me happy. I love him just as he is, just for being him.

It struck me that this is what it means that God delights in his children. I often experience God as love, as a fierce and strong love, but to feel personally loved by God is a bit different. I've often suspected that although I know God loves me, really he loves some perfected version of me - loves what I can be, or perhaps just the good bits of me. As I watched Benjamin I realised that God loves us, me, in the same way. We're God's children, and the mere fact that we exist fills him with delight. He's not waiting for us to become perfect before he loves us, he knows exactly what we like and he loves us. He loves us just as we are.

This moment of realisation has come alongside a deepening self-acceptance, a realisation that it's alright to be me. I can't be anyone else or anything else other than what I am. As much as I have failings and weaknesses, as much as I need and want to change, all I can be right now is what I am right now. God doesn't expect or demand us to be anything other than what we are. Sure we need to change, but that's all in his hands too. God loves us, takes delight in us, just as we are. Just for being us.

The more I explore who I am the more convinced I am that guilt and shame are the power of sin. The danger is that because we know how far from what we could be we are that we think we're supposed  to feel bad about it. The very opposite is true! Forgiveness means that we don't have to feel bad about who we are or what we've done. The past and the dark parts of our nature are all dealt with, God doesn't hold them against us. This is the central theme, the whole point, of Christianity. Yes we need to face the reality of who we are, take responsibility for who we are and deal with the consequences of anything we've done, but we don't need to feel bad about it.

Perhaps one of the hardest of ironies of life is that it's only as we're able to accept ourselves as we are that we're able to change. It's only as we can face what we are, our memories and the past, without flinching that we can let go of it and it loses its hold on us. Memories don't disappear, but the power they hold over us can. Guilt and shame are what stop us facing who we are, but we can choose to let go and refuse to feel bad about who we are.