The Varieties of Religious Experience: The Religious Outlook 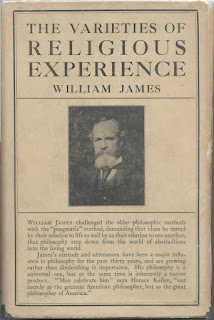 I recently started reading The Varieties of Religious Experience: A Study in Human Nature by William James. It's one of the classic books in the study of the mystical and I've only just begun reading it. In this book William James is mostly concerned with the individual mystical experience and my main interest is the corporate experience of God, but despite the moderately archaic language I'm enjoying it so far.

In the early part of the book William James attempts to tease out the difference between the religious outlook on life and a purely moral or "stoic" outlook on life. Here is his conclusion:


For when all is said and done, we are in the end absolutely dependent on the universe; and into sacrifices and surrenders of some sort, deliberately looked at and accepted, we are drawn and pressed as into our only permanent positions of repose. Now in those states of mind which fall short of religion, the surrender is submitted to as an imposition of necessity, and the sacrifice is undergone at the very best without complaint. In the religious life, on the contrary, surrender and sacrifice are positively espoused: even unnecessary givings-up are added in order that the happiness may increase. Religion thus makes easy and felicitous what in any case is necessary; and if it be the only agency that can accomplish this result, its vital importance as a human faculty stands vindicated beyond dispute.

So the big difference between a religious (spiritual) outlook and the merely moral is the capacity to find joy in adversity.

This reminds me very much of the attitude of the Vikings I describe in Bring on the Battle. Because the Vikings don't fear death on the battlefield, it is their route to Valhalla, they are virtually undefeatable in battle. Our battle, alongside the ethereal spiritual warfare, is made concrete in the daily struggle of being a living human with people we care for and responsibilities to fulfil. Let's find the joy of the battle, plunge into the struggle with everything we have. If we don't what else is there?

On this topic William James adds:


If religion is to mean anything definite for us, it seems to me that we ought to take it as meaning this added dimension of emotion, this enthusiastic temper of espousal, in regions where morality strictly so called can at best but bow its head and acquiesce. It ought to mean nothing short of this new reach of freedom for us, with the struggle over, the keynote of the universe sounding in our ears, and everlasting possession spread before our eyes.

Pressed upon as you are, to whatever extent you find yourself able to choose your outlook on life let it be one of girding up your loins and pressing further on and further in.
Posted by Michael Foord at 16:21